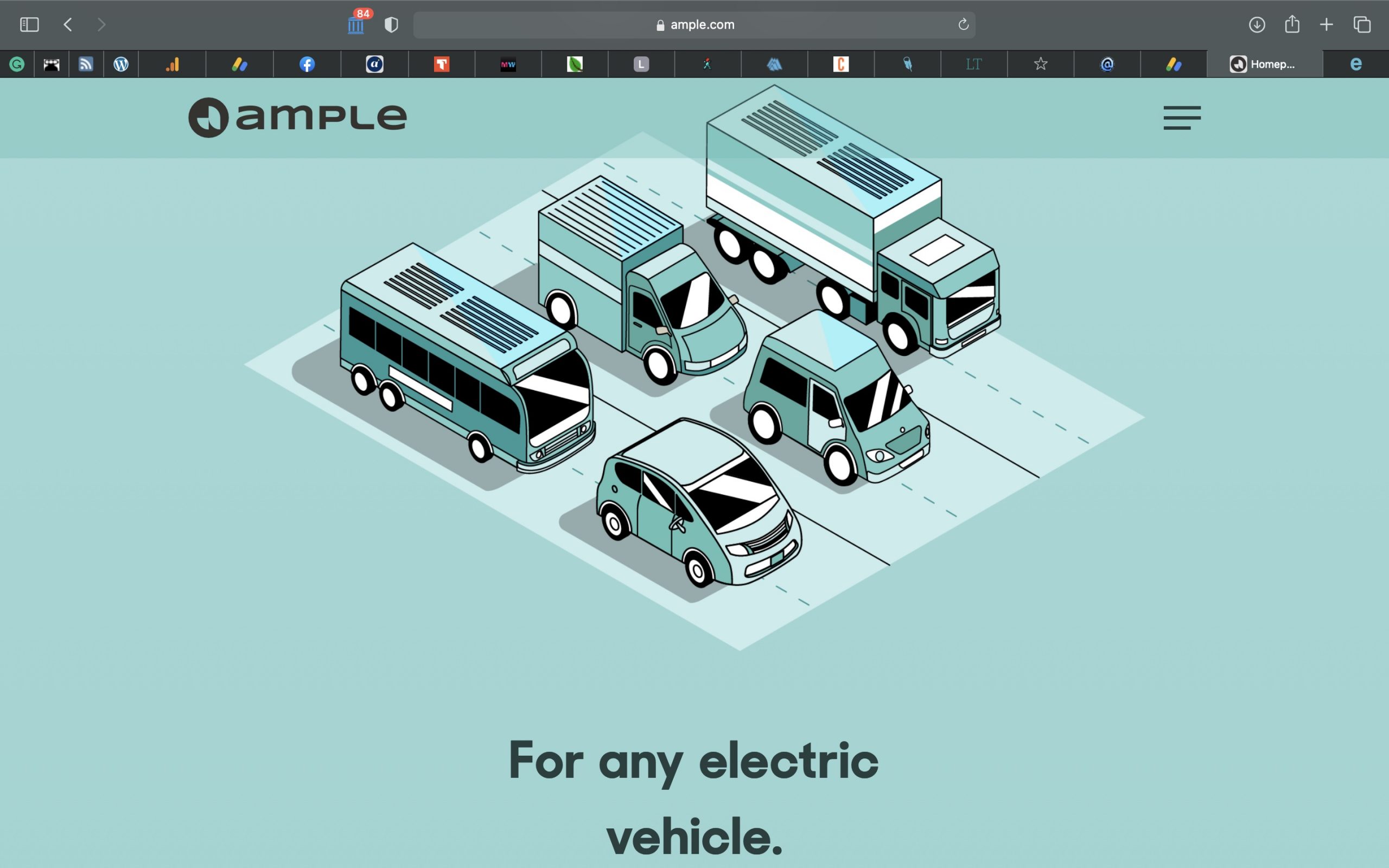 After seven years of development, battery supplier Ample is poised to begin offering their battery swap technology to businesses, with the goal of ultimately expanding the service to individual consumers.

The concept behind’s Ample’s battery swapping strategy is elementary. Robots will be trained to remove discharged battery packs from an EV and replace them with fully charged ones. Drivers on a road trip could pull into an Ample Battery station and the robots would immediately go to work replacing the batteries, sort of like a robotic pit crew. The company claims they should be able to completely replace an EV’s battery packs in ten minutes.

I have to admit the idea is intriguing. If you ever used a cordless drill, you are familar with the concept. When the battery you are using becomes exhausted, you flick a switch and eject it. Snap in a new cell and year off to the races.

But EVs are altogether different than drill motors. Batteries on electric vehicles aren’t designed to snap out. Imagine if everytime you had to swap batteries on your cordless drill you had to remove several bolts, unsolder some wires and solder new leads in place. Easier to stick to a power drill connected with an AC cord.

Ample’s robots would need to know how to remove the batteries on a plethora of vehicles. Some might be relatively straightforward to service. But easy service and replacement isn’t typically a high priority for automotive engineers. Anyone who has ever been forced to disassemble half of an engine to replace an inexpensive sensor knows what I am talking about.

If Ample can create a powerful network of battery swapping stations, then maybe automakers will have an incentive to design their cars so Ample’s robots have easy access. But it is a chicken and the egg situation. Ample will need to grow their network to a large enough size that drivers want to use it. Then they will put pressure on the car makers to make new vehicles compatible with Ample’s project. But unless the majority of EVs can be serviced at an Ample swap station they are unlikely to achieve the critical mass needed to force the car maker’s hands.

I am much more confident about the Consortium for Motorcycles and Light Electric Vehicles. According to a story in elective.com, motorcycle makers Honda, Yamaha, KTM and Piaggio have entered into an agreement to develop motorcycles and small vehicles that utilize a common, swapple batteries. Since the machines will be designed from the ground up to accept the common battery, it will be a simple matter to exchange batteries on these models.

There are three reasons why I see this as more practical than Ample’s more ambitious plan.

Ample, in contrast needs to train their robots to exchange heavier, semi-permeant battery packs that are secured by a wide variety of methods. Further more, in some vehicles, the battery packs are stuffed into whatever space the engineers can find, making them anything but a standardized design.

Ample claims to have created plates that will allow their battery packs to be adapted to all EVs. But unless they convince manufacturers to design their vehicles to accommodate Ample’s standard battery packs, it seem some EVs would require extensive modification to allow the Ample batteries to be easily swapped.

Ample glosses over this in their website, which is heavy on info graphics but light on specifications. The company tells car makers “Compatible with any platform. No modification necessary.” The site goes on to state “The process of getting a new car on the Ample platform takes 2-3 months. Your EV can still support the original battery since the same vehicle design can support both offerings”

I’m confused. The website says, “No modifications necessary.” Yet, EV manufacturers will need to do some work to allow the Ample system to operate with their vehicles. Otherwise why does it require 2-3 months to integrate a car into the Ample system?

Ample has been at this for seven years. Maybe they have had time to address these concerns. But I wish they would provide more on how exactly this program will work.

Don’t misunderstand. I think Ample’s idea has great merrit. I hope they succeed. But the idea of robots undertang how to swap batteries on every model of EV ever made sounds fantastic. Being able to do it in ten minutes sounds too good to be true.

And you know what they say about that…